Walking around Yesler Terrace, the first public housing project in both Seattle and Washington State, I’m drawn to its story. Having climbed the steep grade of Yesler Way from Pioneer Square, I find the location of this place is central, and it’s importance to Seattle, even moreso. As the first fully-racially integrated housing project in the nation, and serving as the one-time childhood home to both Jimi Hendrix and former Governor Gary Locke, I can’t help but settle on the need to preserve this place. 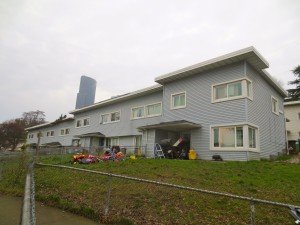 But preservation, in the traditional sense, is losing the battle. As a part of a $2 billion, 5,000-unit redevelopment, the cedar-sided, flat-roofed Yesler buildings with 561 units of affordable housing will give way to several glass and concrete mixed-use, mixed-income buildings. Parks, office space, and an already completed community center will bring added investment to a neighborhood through which a soon-to-debut Seattle Streetcar alignment from Pioneer Square to Capitol Hill will run. The project, like many former public housing redevelopments across the United States, has been met with its fair share of controversy. 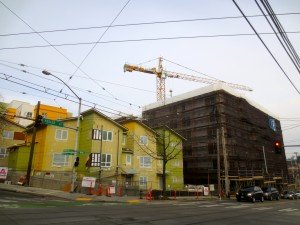 The newest buildings of the Yesler Terrace project on Boren Avenue. The yellow buildings, left, are SHA built, the building to the right will be market rate housing built by Vulcan. The SHA is required to build affordable housing before market rate buildings are developed. Photo: Daniel Ronan

Anne Fiske Zuniga, the deputy director of the Seattle Housing Authority, kindly gave me a tour of the mixed-income project currently in the beginning stages of development. On a cloudy day in the beginning of January, we walk along the steep streets of First Hill, the home of Yesler Terrace, and, until recently, almost 1,200 public housing residents. 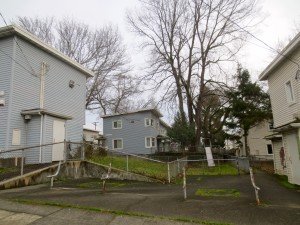 At 30 acres, it sits on prime real estate with unobstructed views of the Mt. Rainer to the South, the Puget Sound, and the Olympic Mountains to the West. The sun breaks through the clouds across the south-facing hillside. The air is crisp. It’s hard to imagine a better place to live downtown adjacent. But with 25% of the Seattle’s region’s jobs within a quarter-mile of the site, it’s no wonder why the Seattle Housing Authority and real estate interests have looked to increase the density of this place.

Low-slung, two-story rectangular buildings with generous garden lots and ample natural light hamper the notion of “maximizing buildable land,” real estate speak for building more housing units per unit of land. From its long-standing 561 units, Yesler Terrace will soon include 561 newly-built units (with the possibility of 100 more) for those making 30% of Area Median Income (AMI), 290 units for people making up to 60% of AMI, 850 workforce units at 80% of AMI, and upwards of 3,100 market rate units.1 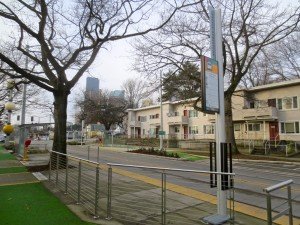 The majority of criticism for the project stems from resident perceptions of being kicked-out and onlookers crying foul, citing the value of the land beneath some of the region’s poorest people. Mounting real estate pressure interest in Seattle, the fastest growing major city in the U.S., also leaves many skeptical of SHA’s motivations. 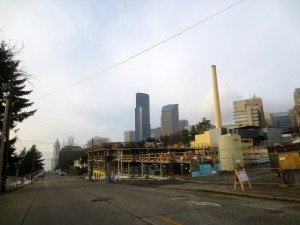 The new construction at Yesler Terrace with the smoke stack of the steam plant to the right and downtown Seattle in the distance. Photo: Daniel Ronan

Anne is forthright on this criticism, “Until you deliver the goods, in most cases, people aren’t going to believe you.” She cites 15 families as having moved back into new and improved housing units. The agency remains committed to providing families displaced by the redevelopment a “right to return” to the property. Planners have even gone out of their way to design some of the new units with larger rooms for childcare businesses, the vocation of many residents. Even with this outlook coming from the top of SHA, however, the agency’s practice of selling land to private developers, including Paul Allen’s Vulcan, leaves the organization with a difficult public relations assignment.

Until you deliver the goods, in most cases, people aren’t going to believe you. – Anne Fiske Zuniga, Deputy Director of the Seattle Housing Authority

Aside from the typical dynamics of any major real estate development, Yesler Terrace’s history provides an added layer of complexity. When the project broke ground in 1941, the federal government provided 90% of project funds, wholly demolishing the economically struggling “Profanity Hill” neighborhood.2 The later construction of Interstate 5 in the 1960s destroyed 260 units, taking out 11 acres of the original 43-acre project. In short, displacement and drastic change are neither new, nor uncommon to this hillside.3 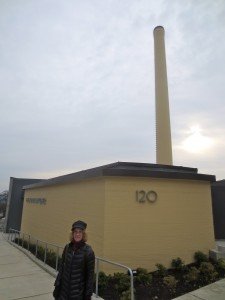 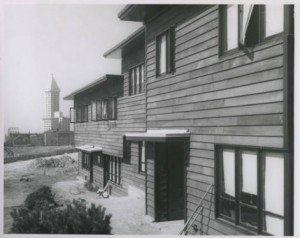 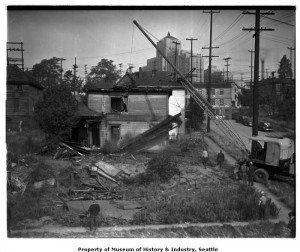 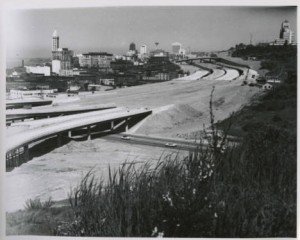 Construction of Interstate 5 in the 1960s taking out 11 acres and 260 units of Yesler Terrace. The Smith Tower is to the left, the Space Needle in the center. Yesler Way bridges across the future freeway. Photo: courtesy of Seattle Public Library, [spl_wl_fnh_00116]

While some preservationists may protest the seemingly wholesale demolition of Yesler, the one remnant will be the adaptively reused steam plant, recently remodeled with $30 million in HUD funding. The facility, which at one time helped heat the buildings of the Yesler complex, now houses SHA’s employment support staff, after school programming, and a Headstart program office. Even if the physical context will soon fall away, preservationists can appreciate what will be the last Yesler fragment uplifting the region’s poor. Anne calls it SHA’s attempt at “preserving heritage in different ways.”

I think that when this is all done, the neighborhood will be better. – Yesler Terrace resident

Today Yesler is home to primarily East African immigrants and refugees, reflecting one of the newest waves of American immigration. I finish my tour with Anne and run into a resident. He stands bouncing a basketball on the sidewalk and chatting with a friend, a non-Yesler resident. I ask the dribbler what he thinks about the redevelopment. He responds, “I think that when this is all done, the neighborhood will be better.” We can hope Yesler lives up to its legacy as a housing project, while also acknowledging, in the words of my tour guide, “there’s a huge rich past, and there’ll be a huge rich future that’s coming.” Let’s preserve both.

Consider visiting or moving to these affordable, walkable, and (in many cases) underrated spots 🧵
View on Twitter
163
0

Resilient Heritage Retweeted · V. Mitch McEwen
@mitchmcewen
In the Americas we are choosing total climate crisis because our entire politics is built around the notion that it takes 'a long time' to dismantle white supremacy.
View on Twitter
28
0

Resilient Heritage Retweeted · Charles Я. Davis
@charliearchy
The daughter of Putin's chief propagandist called me from Moscow to complain about being sanctioned by the US. https://t.co/ckvSKkkMQ9
View on Twitter
2861
0